I never pictured myself as a nine-to-fiver with a repetitive office job and the same old commute every day.

My dreams were of a job with more flexibility, more variety and more excitement.

But, having graduated at the beginning of the recession, I found my options severely limited.

The pressure was increased by the mounting debt my then partner and I were failing to pay off and the bad advice we’d taken to apply for a mortgage and buy our own house.

I had to take work where I could find it and I needed the income to be stable.

After more than three years of accepting any job that was came my way simply to make sure a second wage was coming in, I finally got a permanent position (my most recent job).

At last I had a salary I could rely on, even if it did mean the same old daily routine of trudging into Leeds and putting files away in an office.

The trouble is, once you get into a permanent role it’s easy to become stuck in the ‘rat run’, easy to forget where it was you were aiming to get to in the first place.

That’s why my previous post discussed the importance of taking time out to remind yourself what your personal goals are.

After I was made redundant, I was lucky enough to be able to spend a week in Cornwall and the fresh sea air really did help clear my mind.

Once the aftershocks from losing my job had subsided, I knew I needed to concentrate on finding a new job and it would have to be quick because I was now three months pregnant.

Even so, I knew it was important to decide what it was I needed from this next role and use that to aid my job search.

To do that, I carried out a task I’d been taught by my mentor: he called it ‘The Post-It note exercise’.

I believe this is the first thing you should do when beginning a search for a new job, whether you are unemployed as I was, or wanting to develop from the role you have.

Its purpose is to make you focus on what it is you want and it acts as a tick list for what you plan to do next.

Here’s how the exercise works:

When I did this for the first time, I was at a stage in my career where I felt my best skills were wasted in my job and I wanted to start showing them off a bit more. These are the steps we took:

Since my teenage years I have dreamed of making a living from writing, the thing that comes most naturally to me.

For too long I lost sight of the only goal I ever had for my career, and I decided this was the time to change that.

Meanwhile, an interest in social media has also developed over the years, having ‘invested’ a lot of time using it I feel I have a good understanding of how it works!

At work, I set up special projects that would allow me to use these skills and show people what I could do. I was good at it and I wanted to do more.

The company I worked for had a great reputation for development, it was part of the reason I had chosen to work there.

I managed to work my way up from a temporary admin role to a permanent job and it was the first time I’d ever had a promotion from an entry level position.

Over the years, I have forced myself through a variety of shifts, for example as a restaurant supervisor my hours had been long and late and they wore me out.

I had sacrificed any kind of social life for that job and in the end it got too much for me, so now having a good work/life balance was essential. 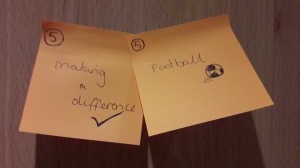 If I could pick an ideal job, it would have both of these.

‘Making a difference’ and football were my ‘nice to haves’.

My last job involved working with the charity department of the company and having a job that actually made a difference to people’s lives made me very proud.

Meanwhile football is my first love, the thing I spend most waking hours thinking about and it has always been at the back of my mind that I would love to work in the sport.

I applied for a job once that was working in the charity section of a football club… how perfect that would have been!

After I’d picked out these attributes I made plans with my mentor on how I would turn them into my career ‘goals’.

The fact I was starting to achieve those goals just as I was made redundant was a cruel irony and made the situation even more difficult to bear.

I was finally getting somewhere and they’d stopped me in my tracks.

Fast forward to the beginning of last year and my priorities changed.

Being made redundant whilst pregnant meant there were different things that I considered essential in my job search.

I set about re-creating The Post-It Exercise, this time taking into consideration the pregnancy and preparation for a newborn.

Looking back at them now, I find the difference really interesting.

Previously, my over-riding priority was development; now, I focused on getting a Temporary role.

I was specifically looking for a placement that would end in July, before my due date at the beginning of August.

Also at the top of the list, I was keen to make sure I had a job with ‘normal hours’.

As I have mentioned, experience had taught me long hours, late nights and split shifts have a real impact on your health and I simply wasn’t willing to take that risk now I was carrying my first child.

Another difference was that I needed to know I could commute easily to the job, I didn’t want to be sitting in traffic or on public transport for more than half an hour while heavily pregnant.

I drive and have my own car so I’ve always been able to include quite a large area in my job search, but now I was having to make sure I only considered jobs within walking distance of Leeds train station.

I’d never limited myself like that before and I was nervous about how it would affect my chances of finding work.

These were my ‘essentials’, the things I wasn’t prepared to compromise on, the other items had become ‘nice to haves’.

Having worked in the PR and charity field before, I decided this should be a focus in my search now.

I rationalised that I had the skills and experience these employers would be looking for and so, in theory, this should be the easiest place to find work.

Below that, my desire to be involved with writing and social media had slipped far from the top of my list.

I would have loved to find a role that allowed me to continue doing the things I enjoyed, but for the next few months they were going to have to lose priority.

Making a difference and football were still options too, but only in so much as I would keep an eye out for them ‘if I was lucky’.

I never expected to be able to fulfil either desire in the short time frame I had to find work and I was willing, begrudgingly, to sacrifice these things if it meant finding work more quickly..

A new world for me.

This was my first experience of how the pregnancy and having a baby would affect my search for work.

I have always felt strongly that having a child should never hold you back from having the career you want to have.

We live in an adaptable world where employers are recognising the benefits of offering flexible working, it’s possible to adapt your role to suit your childcare needs.

More importantly, I feel really strongly that a child should have parents as role models who work hard at their careers. I honestly think that’s one of the best lessons you can teach your little ones.

But, for these next six months I had to move away from that mindset, because this next job search wasn’t about looking for a new career.

I hated being back in the position of having to look for a job, any job, to get me through a tough stage of my life.

I hated the fact that being in this position had been entirely out of my control.

And I hated that it had come at a time where I had finally felt I had a say in my career.

In the decade since I’d graduated, it felt like I had been constantly searching for jobs, applying for them, trying to work out why I hadn’t heard back and improving my CV for the next one.

When I achieved promotion to my last role, part of the reason I was so ecstatic was relief that I no longer had to do all of that.

The frustration that I’d been forced back into it without any choice and through no fault of my own took a long time to deal with, but I had to get over it.

I had to stop sulking and get myself out there so I could get some money saved up before I had to stop working in July.

It was such a short time away and I felt I had so many obstacles to overcome.

At least now I knew where to start.

Have you ever used the ‘Post-It Exercise’ before? How did it go for you? Are you looking for a new job now? Give it a try and let me know how you get on!

If you’ve enjoyed reading this, I hope you will join me in the rest of my journey. You can be the first to read my next post about starting my search for a new job by clicking the ‘Follow’ button below.

My blogging journey began when I combined my two favourite things in life: writing and football!

You can find out more on my blog The Diary of a Tractor Girl.