A Mum with no sleep: my struggles in a Vlog

From the moment you announce you are pregnant, the world seems to become obsessed with the word ‘sleep’.

It became a pet peeve of mine… ‘Get as much sleep as you can now, because you won’t get any when he’s here’. Yes, so you and every other parent keeps telling me.

I used to feel uncomfortable when a parent would say ‘you don’t understand the word tired until you have a baby’, I found it really patronising.

But nowadays, I totally get it. I never really understood exhaustion until now.

Our little boy is seven months old at the moment, seventeen pounds of giggly cuteness that has shown me a level of love I never thought possible.

But our battle with sleep, which has been going on for almost four months, has meant I often haven’t felt that.

I decided to Vlog openly about my experiences in the hope that other Mums experiencing the same will know they aren’t alone.

You can view my video here 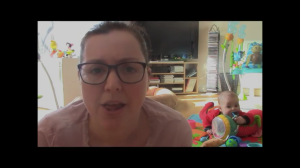 How is your little one sleeping? Have you experienced problems like ours? What advice would you give other, sleep deprived Mums?

My blogging journey began when I combined my two favourite things in life: writing and football!

You can find out more on my blog The Diary of a Tractor Girl.